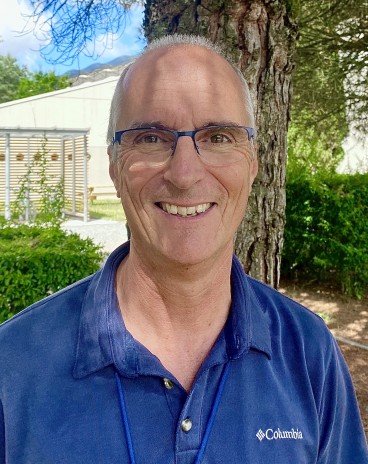 Responsability of the biotchnology room

Pr. Bertrand Garbay received his PhD in Biochemistry and Molecular Biology at the University of Bordeaux in 1988, supervised by Pr. Jacques Bonnet. After his military service in a laboratory of the health service of the French army (IMTSSA, Marseille), where he set-up a detection system for the yellow fever virus in cell cultures, he obtained a post-doctoral position in Professor Anthony Campagnoni’s laboratory (Neuropsychiatry Institute, University of California Los Angeles). There, he studied the expression of myelin genes in the central nervous system. In 1990, he was appointed Associate Professor at the University Bordeaux 2. Between 1990 and 2000, he pursued his studies of the nervous system myelination in the laboratory of Pr. Jacques Bonnet, and thereafter in the research unit of Pr. Claude Cassagnes. He was then appointed Full professor in 2001 at the Ecole Nationale Supérieure de Technologie des Biomolécules de Bordeaux (ENSTBB, University Bordeaux2 and now Bordeaux INP). Between 2001 and 2005, his research projects were focused on the study of the regulation of the expression of enzymes involved in lipid metabolism in plants. Between 2005 and 2015, he headed the research unit EA 4135 at ENSTBB. This laboratory studied new processes for the expression and purification of recombinant proteins in bacteria, fungi and mammalian cells, with a specific interest for antimicrobial peptides. The biofilms formation by bacteria was another topic studied in this laboratory. Since 2016, Bertrand Garbay joined LCPO to develop the bioproduction of polymers like the Elastin-like polypeptides (ELP).

Member of the Scientific Council of Bordeaux-INP, of the Council of ENSTBB, of the Doctoral School of Biology of Bordeaux University.

Teaching Regulation of Gene Expression, Synthetic Biology, Transcriptomic and Bio-mimetism for the first, second and third years of the school of engineers in biotechnology ENSTBB.

Pr. Bertrand Garbay has published 60 research articles and reviews and he is co-inventor of 2 patents.