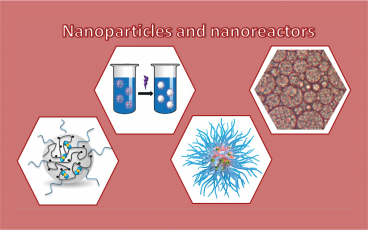 Part of our research focuses on polymerization in dispersed medium, with a strong expertise in the design of plurifunctional nanoparticles (NPs) by dispersion ring-opening metathesis copolymerization (ROMcP) of norbornene (Nb). In this case, macromonomers possessing a norbornenyl-type polymerizable group are specifically designed to act both as stabilizer and a multivalent platform to attach active molecules. For instance, polyglycidol (PGLD)-based macromonomers, can advantageously be selected instead of poly(ethylene oxide) (PEO) derivatives.

NPs can be functionalized with antibiotics through a pH-sensitive imide bond, and grafted onto flat titanium surfaces, creating a pH-responsive bone implant that can release the antibiotics in response to a decrease in pH (a sign of infection). Similarly, NPs grafted with antifungal agents can eradicate microbial contamination in aircraft fuel tanks. Thermo-sensitive NPs have also been developed to relieve cancer-associated pain.

To further perform ROMP reactions in aqueous dispersed media, a photolatent ROMP catalyst has been designed to be soluble within monomer droplets.

Pickering emulsions rely on the irreversible adsorption of NPs at the oil/water interface, conferring them high stability over a wide range of temperatures. In this context, we have used acetylated cellulose nanocrystals (CNCs) to stabilize a large panel of oil-in-water (O/W) monomer emulsions of increasing polarity and solubility. Free-radical polymerization of these systems produce composite micrometric beads or nanolatexes. Alternatively, (CNCs) grafted with bromoisobutyrate moieties (CNC-Br) can stabilize O/W, inverted (W/O), and water-in-oil-in-water (W/O/W) double emulsions of styrene. These emulsions can be subsequently polymerized by the AGET-ATRP mechanism from the brominated particles surrounding the stabilized droplets. Capsules (10 μm), open-cell materials and capsules (50 μm) containing smaller beads (10 μm) can thus be achieved using n-butyl acrylate instead of styrene in O/W emulsion, plain beads are achieved. The morphology of the polymer spheres (empty or filled) can also be tuned by manipulating the monomer conversion and its hydrophobicity.

Besides NPs, our team has been developing multi-compartmentalized microcapsules, enabling active molecule storage. The related strategy employs the intermediate phase polymerization of double emulsion, i.e. containing two antagonistic stabilizers, with a more hydrophilic surfactant to stabilize the O/W emulsion, and a more lipophilic one to stabilize the reverse W/O emulsion. Such a strategy leads to particles composed of liquid droplets containing the active molecule encapsulated/dispersed within the polymeric phase. Such encapsulation is of particular interest in cosmetic, where fragrance consists of a mixture of various lipophilic active species. 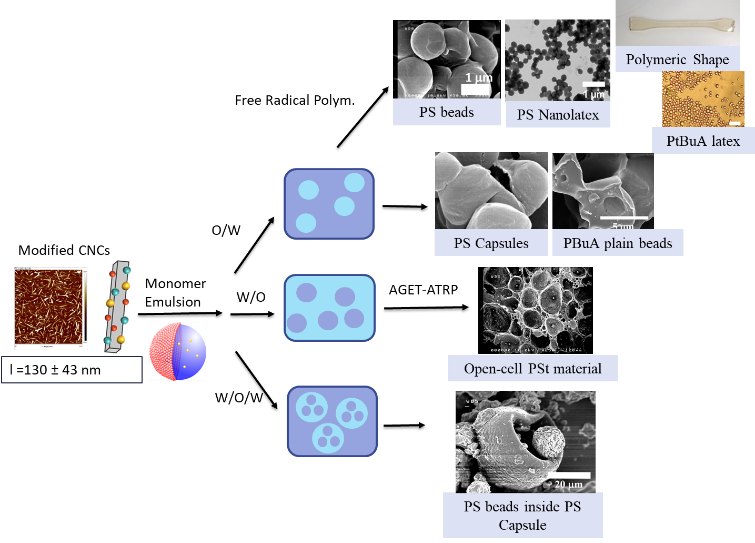 The ability of NHCs to strongly bind transition metals is also exploited to access unique organometallic nanostructures catalysts, including single chain nanoparticles (SCNPs) or polymeric micelles with a cross-linked core made of NHC-Pd-NHC bonds. The exceptionally high catalytic activity of such polymer-supported organometallic species has been demonstrated in Suzuki and Heck type C-C coupling reactions, with water as reaction medium, following a micellar catalysis approach. 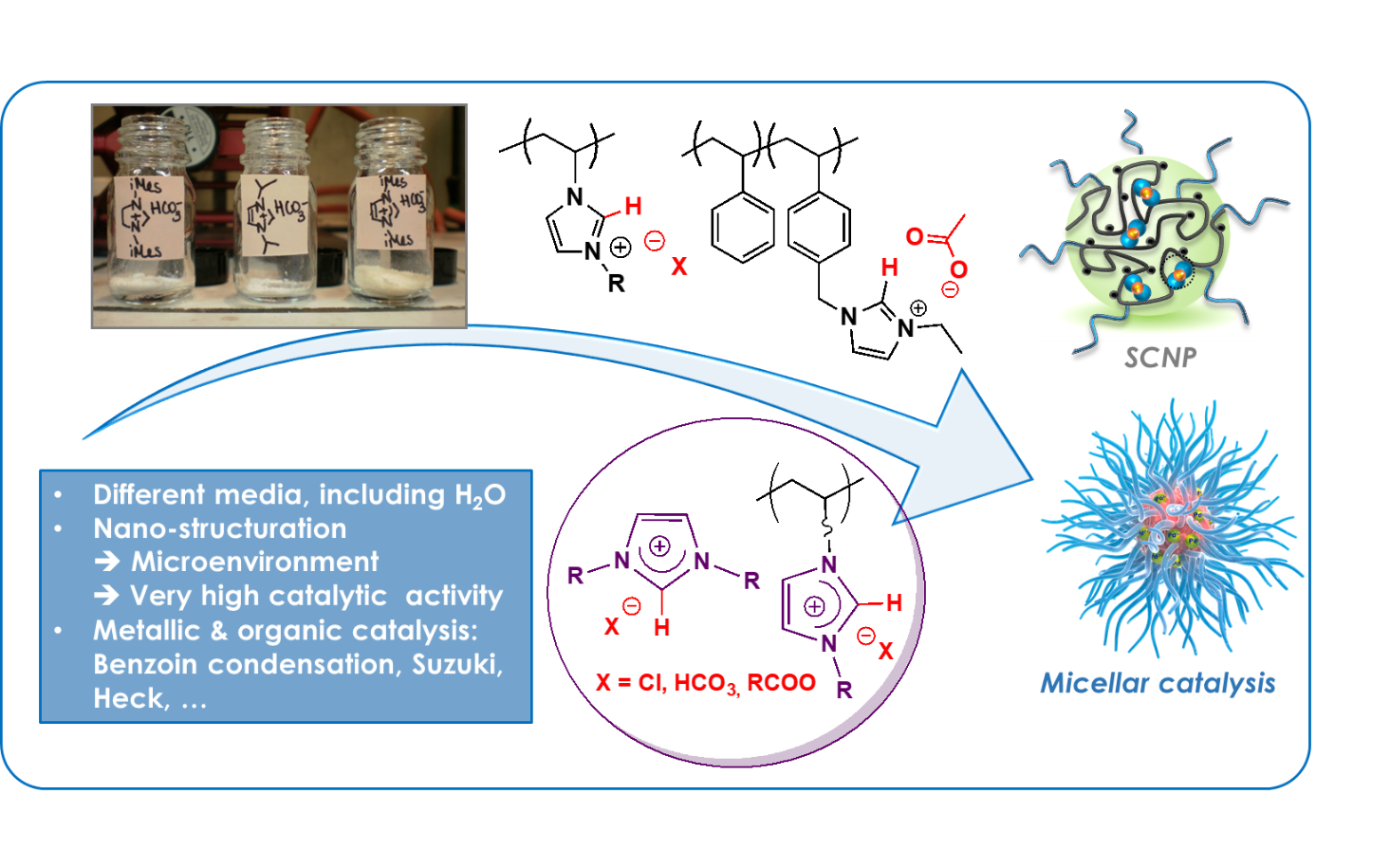