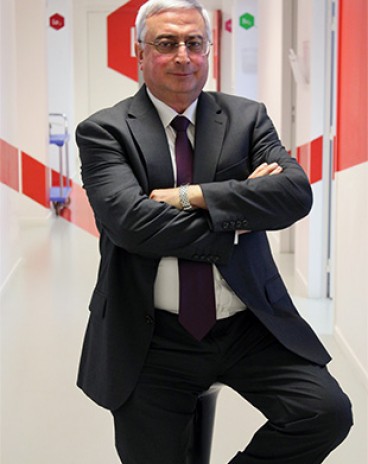 Since 2009 Georges Hadziioannou is Professor at the University of Bordeaux, Holder of the Chair “Advanced Functional Materials for the emerging Information, Communication and Energy Technologies”. He is heading the group “Polymers Electronic Materials & Devices” at LCPO. He is holder of the Industrial Chair SMILE (ANR/Arkema/ISORG/VALEO/Surys). Simultaneously he is the Coordinator of the EquipEx ELORPrintTec and Scientific Director of the LabEx AMADEus.
Georges Hadziioannou received his Doctorate in Physical Sciences from the Louis Pasteur University of Strasbourg in 1980. Between 1980 and 1982, he was associate researcher at the Polymer Science and Engineering Department of University of Massachusetts. In 1982 he became research staff member at IBM Almaden Research Laboratory where he directed the group “Surface and Interface Dynamics” from 1986 to 1989. Between 1985 and 1989 he was simultaneously Industrial Research Fellow of the National Institute for Science and Technology (NIST), and consulting Professor at the Department of Chemical Engineering at Stanford University.
In 1989 he became Professor at the University of Groningen (Netherlands), where he directed the Materials Science Center (today named Zernike Institute for Advanced Materials) from 1997 to 2000. In 2001 he moved to the Louis-Pasteur University in Strasbourg where he took the direction of the European Engineering School of Chemistry, Polymers and Materials between 2004 and 2009.

His career is characterized by a strong commitment to fundamental research at different universities and research institutes worldwide and an important industrial tenure at IBM Almaden Research Laboratory. He has pioneered works on nanostructured polymer materials with innovations in flexible and printable organic electronic materials. He published more than 400 papers (H=65 with 14058 citations) and he is holder of 45 patents. He directed 56 PhD’s and hosted in his research group more than 70 post-docs and invited professors. He was co-founder of 2 startups: “Polymer Service Center”, for scientific consulting of small and medium size companies, now POLYVATION, and “Papyron”, for the development of innovative technologies for electronic paper.
His scientific and engineering work was recognized with the following awards and honors. In 2019 he became Doctor Honoris Causa, Aristotle University of Thessaloniki, Department of Physics. In 2016 he was elected foreign member of the US National Academy of Engineering “For foundational discoveries and insights enabling the development of polymers with advanced functionality and performance”. In 2015 he obtained the civil recognition “Chevalier des Palmes Académiques”. In 2010 he was elected member of the Academia Europaea. In 2007 he was recognized with the Süe Award of the Société Française de Chimie. In 1998 he obtained the Humboldt Research Award. In 1993 he was elected Fellow of the APS (US). He is member of the following Editorial Boards: Macromolecular Materials and Engineering – Wiley-VCH, Advanced Materials Editorial Advisory Board, Macromolecules and ACS Macro Letters
Over the years he has coordinated many European and National research and development projects and he has served in many national and international committees in various capacities.

Pr Georges Hadziioannou has co-authored 420 publications (H = 65), the most recent being listed in the HAL database, and 45 patents. He presented more than 177 invited conferences (his lecture at the Waterloo Institute for Nanotechnology can be watched on-line)